The Graduate Group in Chemical and Biomolecular Engineering at the University of Pennsylvania has been a dynamic one since its creation in 1893 and today it ranks among the nation’s finest.

Students in the Graduate Program in Chemical and Biomolecular Engineering may receive either the Master of Science in Engineering (MSE) or the Doctor of Philosophy (Ph.D.) degree. A part-time master’s program serves the needs of professional engineers who wish to pursue an MSE degree while continuing to work in industry. Our graduates not only pursue successful careers, they provide leadership in academia and a wide variety of industrial settings in fields from pharmaceutical, biotech, advanced materials, and electronics, to the more traditional areas of chemicals, oil, and gas.

Master of Science in Engineering (MSE)

The MSE program provides highly-qualified students with the firm theoretical foundation and interdisciplinary skills that are essential for career advancement in the rapidly-changing field of chemical and biomolecular engineering. Our innovative Master of Science in Engineering (MSE) Program in Chemical and Biomolecular Engineering (CBE) is known for its success in preparing students for leadership roles in the oil, chemical, pharmaceutical, and electronics industries

The Ph.D. program in Chemical and Biomolecular Engineering requires a superior capability and promise to make original contributions to the theory and practice of chemical and biomolecular engineering. Doctoral candidates must demonstrate the ability to perform independent work and study at the highest levels. The degree is crucial for those planning to teach chemical engineering, as well as for those embarking on a career to advance research in the field.

Students from the top engineering programs around the world seek out Penn’s Chemical and Biomolecular Engineering Graduate Program for both its excellence and its broad opportunities.  Ph.D. students draw on Penn’s multifaceted research environment which may include cross-disciplinary collaboration with research groups across the University, including the Medical School, Materials Science, Physics, Bioengineering, Chemistry, and many more.  The full resources of this Ivy League University together with the cultural and athletic opportunities of the City of Philadelphia make Penn CBE a prime choice to pursue a chemical and biomolecular engineering advanced degree. 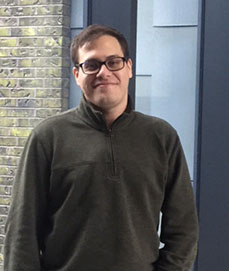 Wilfredo was born and raised in a small town in Puerto Rico called Aquada, where, as a child, he dreamed of working for NASA and exploring space as an astronaut. He even named his first dog, a beagle, NASA.  As he got older, however, his aspirations changed. He was eventually attracted to the field of Chemical Engineering because in his words, “It provides a deep understanding of phenome and makes you a much more complete individual”.

Wilfredo obtained two undergraduate degrees, one in Chemical Engineering and the other in Industrial Biotechnology, both from in the University of Puerto Rico at Mayagüez (UPRM). UPRM is considered one of the premiere engineering institutions in Latin America.  The Chemical Engineering program in UPRM is extremely diversified and retains professors with deep ties to very prestigious institutions in the United States.

Consequently, Wilfredo’s first undergraduate internship experience was at Penn for LRSM (Laboratory for Research on the Structure of Matter), which left a pretty good impression upon him. He ultimately chose Penn to pursue his PhD in Chemical Engineering, because of its faculty, and he was also impressed by Penn’s competitive chemical engineering program, which focuses deeply in promoting a co-advising environment.  Also, in his opinion, Penn is an interesting place because the campus is full of history, including its Ivy League heritage, and Philadelphia’s historical significance.

Wilfredo is co-advised by Drs. Kathleen Stebe and Daeyeon Lee. His research area is focused on interfacial complexation on water-water systems. These encapsulation systems are very useful for their abilities to sustain micro-niches or serve as systems to study cell-cell encapsulations. He sees many applications for using this research to study how cells interact, and the behavior of bacteria under controlled stresses.

When asked about his plans for the future, Wilfredo states the answer to this question changes constantly. For the moment, he plans to follow a traditional course and become part of an industry that works closely to his final research endeavors, but this might change.  He has not ruled out the possibility of going back to Puerto Rico and finding a faculty position.

For now, as space exploration is no longer on is mind, Wilfredo intends to explore a little closer to home. He has always wanted to see and experience more of the fascinating and historic City of Philadelphia.